Bough Down by Karen Green 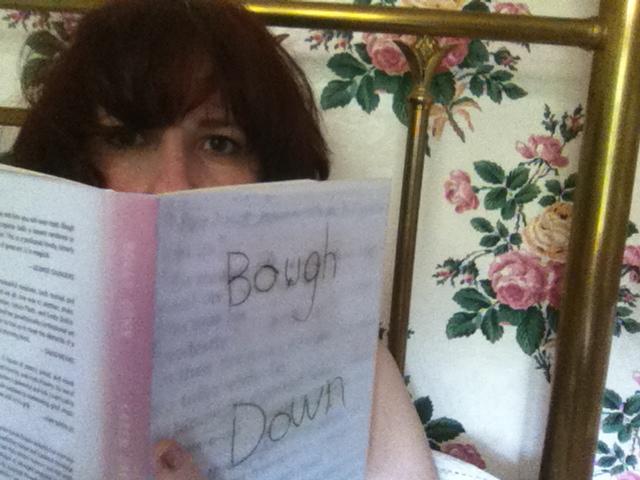 One of the pleasures I take when I go to see my mother is exploring her bookcase and, most especially, the pile of books that she is currently reading or has recently read.  Sometimes I seek out the books at my local library.  Other times, she ends up sending me one of the books I’d previously seen lying around.  On my recent trip, I noticed on book in particular.  The title intrigued me (because who doesn’t like a good pun?) so I picked it up to read the blurb.  Only, there was no blurb.  There was nothing to tell me what the book was about.  So I opened it and read the first short, prose piece.  I wasn’t sure what I was reading but I didn’t stop until I finished Bough Down by Karen Green a little over an hour later.

Sometimes I had to put the book down, like when I realized what it was I held in my hand, a fragmented presentation of loss.  You know how something happens in your life that leaves you broken and everything you say, feel, do is equally shattered?  This is how this book flows, with images and emotions coming in small but intense doses.  On par with the raw emotion of both Joan Didion's Year of Magical Thinking and Sonali Deraniyagala's Wave, this is a brutal yet beautiful memoir of one woman's painful loss.  This is prose poetry cum confessional memoir and anything I could say about it is inadequate to the task.

Now, perhaps you are one of the many who knows who Karen Green is and what this book is about but I came to it ignorant as can be.  If you do not know who Karen Green is and are as oblivious as I to what this book is about then I beg you to dare to read this book without a context, to just allow Green's brilliant honest writing draw you into what it is she is sharing.  Nothing I've read compares with this book. I didn't read it; I devoured it.  I closed it and ached to reread it.  I told my mother that, when she is finished with it, to please send it to me.  I don't think reading this book one time is enough and I've a feeling that even after ten readings I'd still find something new to leave me breathless
Posted by Satia at 5:00 AM 4 comments:

What I Loved by Siri Hustvedt 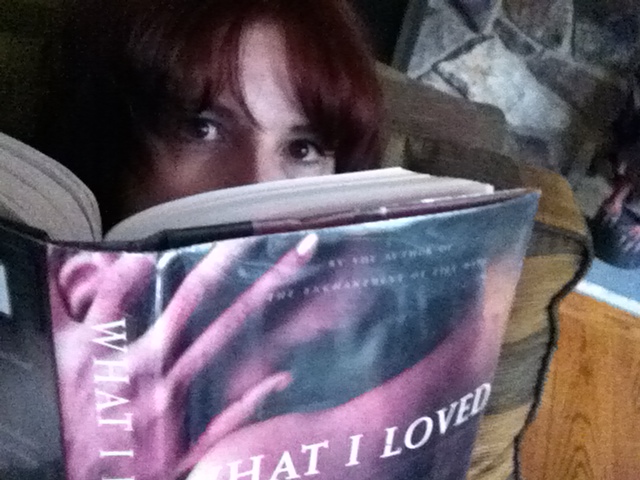 The road to a book can sometimes be circuitous.  Recently, a convicted murderer was released from jail.  If you want to know to whom I refer, you can watch Party Monster and/or read the book written by one of his cohorts who was not, himself, convicted of anything but narcissism.  I’m choosing no to name names because certain types crave fame at any cost.  I didn’t even know that the one man was released until I clicked a link accidentally and recognized a name, a face, and I read.  He mentioned a book by Siri Hustved whose name sounded familiar but I didn’t know why, where, how.  I just knew that I recognized her name and didn't care to read anything else about this man who was taking full advantage of his perverse celebrity and freedom.

Then I was sifting through a list of books available for review and he name not only came up again but the blurb specifically mentioned the book mentioned in the article:  What I Loved.  So I sought it out at the public library and requested her most recent novel, looking forward to the opportunity to compare an early work with a later, more contemporary, one.

What I Loved is the story of an art historian, a professor who buys a painting in a gallery and befriends the artist.  The two men are married but the artist’s wife is difficult to get along with and, when the two divorce and he remarries, the two couples become a lifelong foursome.  They even have children around the same time and the two boys grow up and eventually apart.  When tragedy comes along, as it inevitably seems to do, how the individuals cope gradually moves the story along.  Each of the characters is beautifully drawn although none of them changes, ultimately being two-dimensional.

Because of this, in spite of the eloquent—sometimes even poetic—prose, the book is ultimately unsatisfying.  That the author was inspired by the sensational events that occurred in New York City in the 80s is evident proving, perhaps, that even a narcissist with no remorse can be right.  The conclusion is apropos to the narrative although it may leave some readers disappointed.  For an early novel, this was good enough for me to want to keep reading.  I closed the book, looking forward to reading her newest novel, to see how far she has come, to see how (if?) Hustvedt’s innate lyricism has matured over time.

Before I Say Goodbye by Ruth Picardie 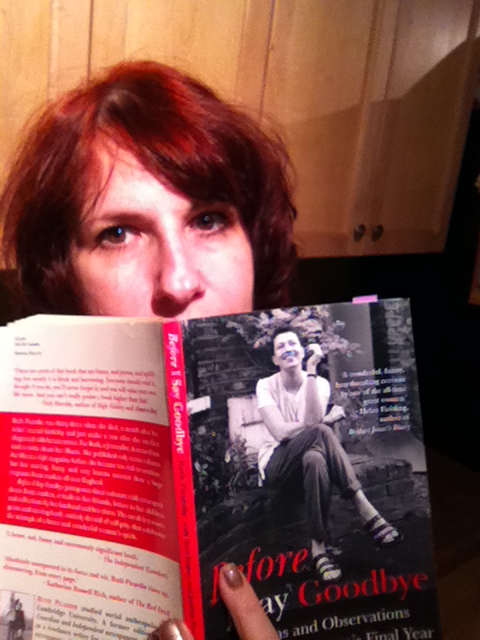 When my mother was diagnosed with breast cancer, I collected quite a few books on breast cancer and she herself passed me a few books of her own.  I didn’t read the books at the time, however.  It was too difficult for me to read the stories of other women, even the ones who survived and lived to tell their own story, because I was too caught up in my own experience to share in anyone else’s.

Not surprisingly, I especially avoided the stories where the woman diagnosed does not survive.  AudreLorde’s profound experience was my first attempt at facing those fears.  My mother had survived five years and then some which, if you’ve ever dealt with cancer, is the landmark timeframe.  If you survive five years without recurrence, you are considered free from cancer altogether.

I eventually pulled Ruth Picardie’s Before I Say Goodbye: Recollections and Observations from One Woman’s Final Year from my shelf only recently.  The subtitle was enough for me to avoid the book but I’m glad I finally got around to reading it. No, it wasn’t an easy book to read.  The first part is a collection of emails written and received in which Picardie shares her fears, her triumphs, and her pain.  One of her friends has been diagnosed with AIDS while others try to offer encouragement or consolation even as they themselves are preparing themselves for the grief that will inevitably come.

Then there are letters from readers because essays of her experience were published in Observer Life magazine.  All seven of her pieces are included in the book, including one by her sister saying that Ruth Picardie herself no longer has the strength to put her story into words.  Her emails become shorter and her pain more evident in the fewer words as her cancer metastasizes and spreads throughout her body.

Page by page, Picardie’s story reveals so much raw truth.  Immediately after her sister’s concluding piece for the magazine is shared, there are the short notes, the final words, Picardie herself hand wrote to her toddler twins, still too young to read.  The last few pages are written by her husband, the man who survives the terrible loss most of us can only imagine with dread.

From the very start, my heart ached for Picardie.  Her wry humor and honesty are a treasure and the world is honestly bereft of a profound voice.  I had to put the book down several times, grateful that my mother is still here with me.  I put the book down because I felt sad for her surviving friends and family.  I put the book down unable to see Picardie slip inexorably away.  And I kept picking it up because I wanted to spend as much time with the author as I could.  She touches the heart because she touches her truth and her friends and family were generous enough to share her with us.  Thank you.  Thank you to all of them.  And thank you to my mother who gave me this book I should have read a long time ago.
Posted by Satia at 5:00 AM 2 comments:

Satia
Satia From the Greek. The root from which we get the words: satiated, insatiable, satiety. Satia is also the name of a Celtic moon goddess. Like Siddhartha, Satia means fulfillment.